We wake up early to be ready for a game drive with the lodge starting at 7:00 with John. We discover that it will only be the two of us, so we are quickly ready for departure before the sun rises. A few meters after leaving, still in the lodge compound, I notice a life-size ‘fake’ giraffe a few meters from the driveway, which I do not remember seeing when we arrived yesterday. But seeing a second and third individual (which are moving by the way) I realise that they are not fake at all. OK, so the game drive has now officially started.

Driving towards the park entrance before sunrise in an open safari vehicle enables us to experience the freshness of Namibian mornings, which hits us full force despite the blankets that John provided us. As soon as we enter the Etosha national park, we see more giraffes. The colours are perfect a few minutes after the sun as decided to wake up, leading to some very nice shots. We also see an elephant, but it is walking away, so we mainly see its backside, which is unsurprisingly quite large. We then have the chance to see about 9 lions sleeping on the plain. They didn’t seem that interested by the many springboks, zebras and ostriches drinking at the waterhole close by.

We have lunch at a waterhole that is quite busy with grazing animals, including a large elephant, which is quickly joined by two other individuals. Two of them start a staring contest.

We continue driving from waterhole to waterhole throughout the day, which gives us the opportunity to watch an outstanding number of thirsty animals. However, the elusive rhino and leopard are up to their reputation and have remained hidden.

Today we drive in the direction of Etosha National park. We stop on the way at the petrified forest to admire a collection of petrified trees. There are also some welwitschias around and we learn that the plant is the symbol of the Namibian rugby team. We arrive at the beginning of the afternoon at the lodge and relax for the rest of the afternoon. The water of the swimming pool is as cold as at the desert lodge, but we gather our courage and take a dip.

We admire the sunset from the deck of the lodge and go to bed early (that will happen for most of the trip) to be ready for a first game drive the next morning.

We drive north along the skeleton coast this morning and see one of the shipwrecks that give the coast its mysterious name (I think there are more further north). Some people have assembled a vaguely human skeleton on the sand using random bones, but they obviously have a dubious knowledge of anatomy.

After less than 2h of driving, we reach cape cross, which is known for two things. 1) it marks the location where the Portuguese Diogo Cao landed in 1486, thus being the first European to visit the region. 2) It hosts a gigantic colony of cape fur seals. According to some sources, there are more than 100000 seals in the colony. The stench and noise of thousands of seals are beyond what the wildest mind could imagine. Even back in the car, the odour follows us for several hours.

It is interesting to point out that about 95% of the cars in Namibia are white, and that most of the cars rented by tourists look strikingly similar: a kind of pick up truck with a hard cover over the bed. Therefore, it shouldn’t be too surprising to learn that we attempted to enter a car that wasn’t ours at the seal colony parking lot. But seeing an unknown woman looking at me from the inside of the car told me that something was definitely odd.

Back in our own vehicle, we retrace our steps back to Henties Bay and then continue inland towards Damaraland. The landscape starts being very flat with sand, but soon mountains start to appear we enter a truly beautiful area. Our stop for the night is at camp Kipwe, which is located among boulders. It’s by far the nicest place we stayed at during this trip. The bathroom is outside, allowing to watch the stars while on the porcelain throne.

We leave with the lodge for a visit of the surroundings, with the most interesting stop being the rock engravings of Twyfelfontein. We are back just in time for a sundowner cocktail at the lodge bar which is located on top of the hill around which the camp is built.  They have a cocktail named Welwitschia: I must try it. The sunset enjoyed from the top of the hill is epic, and the dinner that follows is excellent as well.

We have a full day to explore Swakopmund, which is apparently well known for its adrenaline-rush-type of activities, but it’s not really what we’d like to do, so after a bit of reading, we learn about a self drive itinerary in the Namib Naukluft national park that will make us discover the local desert landscape. Our quest to get an entrance permit for the park leads us to meet a lady who cannot start speaking to us before we have locked the metallic gate behind us, as she “cannot take her eyes off it until it’s locked”, which apparently uses all of her brain power.

The itinerary first makes us discover lichens, that are all crumpled and black, but open up and become green when sprinkled with a bit of water. Good that we have enough water bottles with us. We then drive through the moon landscape, which unsurprisingly looks like a moon landscape and is quite breathtaking. A few km later, we meet the Welwitschia, a very curious endemic plant that has two continuously growing leaves. Because of damage induced by wind, sun and sand, each leaf gets split into several bands, which gives the plant the appearance of a not-so-fresh lettuce. It takes 20 years until the plant gets flowers. The plant is either male or female and can leave for thousands of years. At the end of the itinerary we reach a 1500 year old individual inside a fenced area. Given its slightly alien appearance, it’s difficult to decide if the fence is protecting the plant, or the tourists…

We have dinner at a German restaurant (Swakopmund has a strong German influence), in which radiant german-speaking customers are happily drinking boots of beer. The Jaegerschnitzel was very good, but huge.

Today, we drive towards Swakopmund through a beautiful desert landscape. We spot a few animals, such as oryxes, zebras, and ostriches. From day 1 our car has emitted intermittent squeaky noises that are a bit concerning, as if something is not quite right with the transmission. The agency quickly arranges for us to visit the Nissan garage once we reach Swakopmund; they even give us the name of a person they have been in touch with.

We reach the Atlantic coast at Walvis bay, where we stop for lunch before continuing to Swakopmund. We stop by the Nissan garage to get the car checked and have to deal with a very unhelpful guy who pretends the agency didn’t get in touch with him, even though he is plain lying. When a phone call confronts him with the fact, he serves us a half cooked excuse. It turns out nothing is wrong with the transmission, and the squeaky noise is caused by the slippage of the belt that drives the compressor of the air conditioning. The problem is semi-promptly (we have to come back the next morning) fixed.

We visit the city (it has a definite German feel) under the beautiful light of the setting sun and have dinner at the Tug, where we enjoyed a great view of the agitated Atlantic ocean.

Our travel itinerary, which amongst other things describes our overnight accommodations, specifies that this one has a wifi that actually works. Turns out it’s not true… 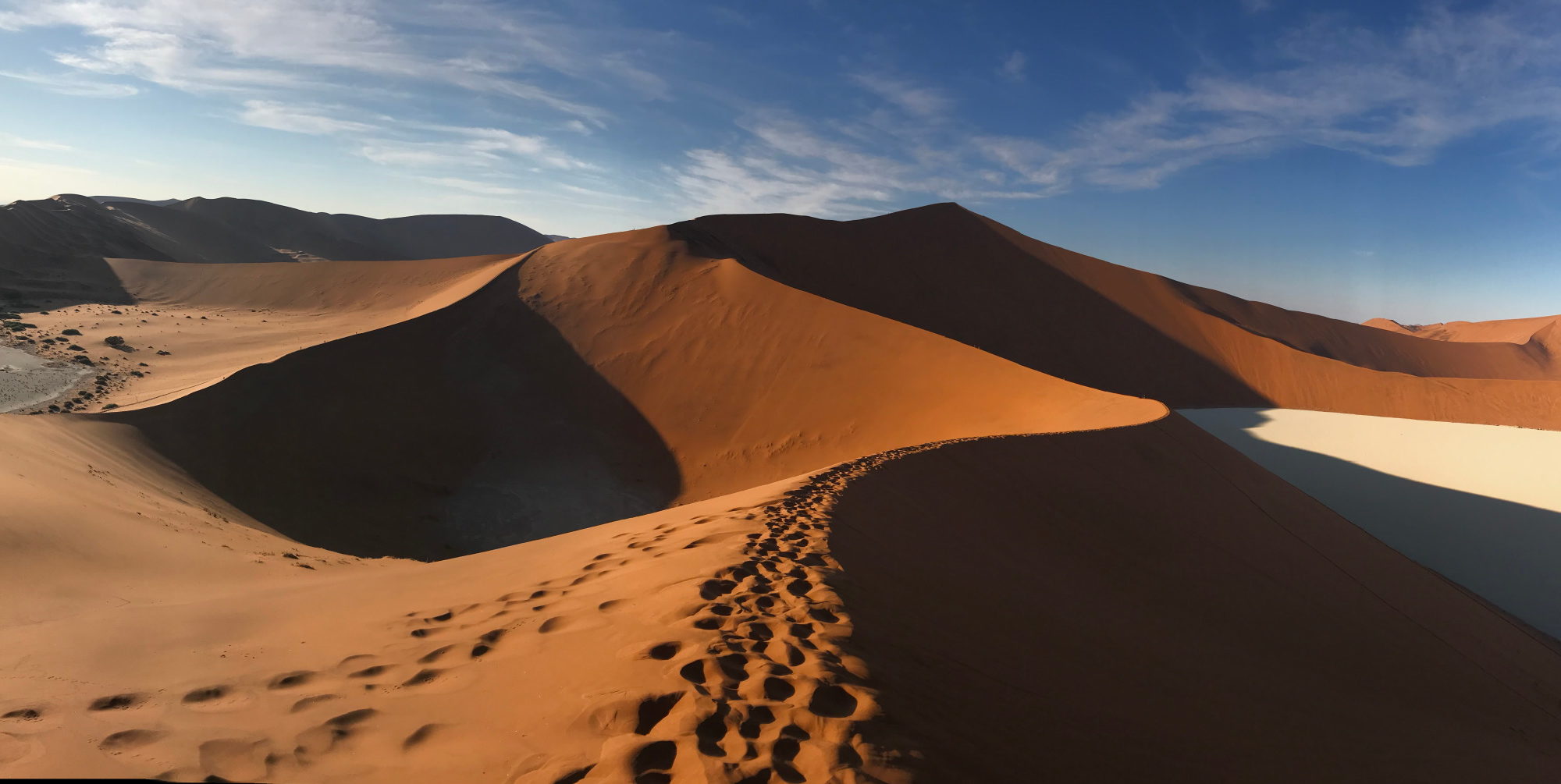 We wake up when the sun is still sleeping and we grab our packed breakfast from the lodge before heading towards the sand dunes of Sossuvlei. The park only open at sunrise (7.30) and we are car number 5 queuing in front of the gate. The dunes are supposed to be best seen at sunrise, hence the motivation to enter the park as soon as it opens. There is about 60km between the park entrance and the dunes, which should take about 1h given the 60km/h speed limit. However, everybody seems to drive at twice that speed, so let’s follow the movement.

The landscape of red sand dunes bathed by the first rays of the sun is impressive and full of contrasts. The last 5km are on a very sandy track, and we decide to leave the car and take the shuttle, despite the fact we have a 4×4.

Once around Sossusvlei/dead vlei, we start the climb of the big Daddy dune, which gives us a breathtaking view of the surroundings. Climbing the sand dune requires a fair bit of effort, but going down is a treat: simply run down the side of the dune to the bottom of dead vlei.

Dead vlei is a very well known sight of Namibia, appearing on many guide books, with its dried clay pan, dead trees and a backdrop of red sand dunes.

On our way back to the parking, we realise that leaving the car before the sand was a good decision, given the number of cars that got stuck and have towed to firm ground by the locals. Towards the end of the day, we drive back to the desert homestead lodge for a beautiful sunset.

After a long trip that started in Auckland and included a 9h layover in Perth (we initially intended to visit the city, but the constant downpour discouraged us), we finally arrived in Namibia, and after a good night of rest, we are ready to start our exploration. We have a brand new Toyota 4×4, and — Io and behold — I realise that I can still drive a manual car. Our objective of the day is the desert homestead lodge, in the vicinity of the famous sand dunes of Sossusvlei. We start driving south, and at some point, stopping on the side of the road to search for a grocery store on the gps, I drive on a freshly painted yellow line. Well, now our car has some yellow spots. White is a boring colour anyway…

The tar road soon turns  gravel road with a beautiful desert landscape. In the middle of the afternoon, we reach the lodge, which sits amid an extraordinary landscape. The weather is warm and the pool seems inviting, but we soon discover that the water is freezing.